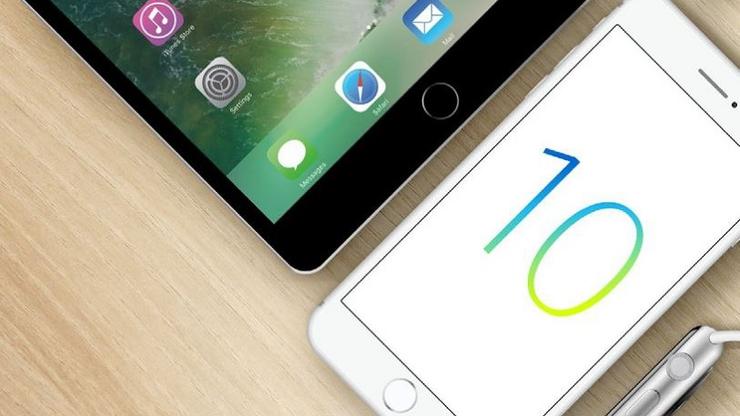 The new version of the software that runs the iPhone and iPad includes features such as quicker interactions with apps and upgrades for its photos, maps and music apps.

The new version of the software that runs the iPhone and iPad will be out in six days.

The release date comes about three months after Apple announced the software during its annual Worldwide Developers Conference (WWDC). New features include upgrades to the Siri voice assistant, to photos and maps, as well as more interaction via the Message app.

With the iOS upgrade, Siri will work with and control many non-Apple apps where users will be able to send messages to family and friends using any application that adds it. For example, WhatsApp, will have immediate Siri support with iOS 10. The software will also have facial recognition to automatically create albums featuring people, places and events.

The lock screen has a lot more information that you can instantly access. Instead of the old style where you might see a single notification and that’s about it, iOS 10 gives you a bunch of widgets right on your lock screen so you can do more stuff quickly.

You can check the weather, see what’s next on your calendar, or even call one of your favorite contacts right from this screen. Or you can search for something you need.

It’s also fully customizable, so you can ditch the default apps for news from The New York Times, photos, or one-click access to your music.

To access it, just swipe to the right on your lock screen.

Everything on your lock screen is also on your unlocked phone as well. You can instantly view whatever you’re browsing on your computer right on your iPhone. This is definitely one of the most useful features I found.

Say you’re browsing a website on your computer, but you have to head out the door. You might copy the link and put it in your note-taking app or text message. No more.

Now you can instantly pull up what’s displayed on Safari and take it to go.

Interestingly (and this may be a bug), my default browser on my MacBook is Chrome, and even though the phone says it’s grabbing the website from Safari, it grabbed my Chrome browser.

To try it, double-tap the home button and click the “Safari” tab on the bottom. Your phone will now automatically tell you exactly where you parked your car. Have you ever walked around the parking lot of Dodgers Stadium for about an hour searching for the car that you could swear was parked toward that back area?

Well, I have. And it’s totally not fun.

Fortunately, iOS 10 solves this common problem by remembering where you parked your car, automatically.

Instead of snapping a picture of your surroundings or jotting down GPS coordinates in notes, iOS 10 will remember your car’s location anytime you stop at a place other than your home.

You no longer need a third-party keyboard to send your favorite GIF to your friends on iMessage. A ton of third-party keyboards give you the ability to send GIFs or other artwork and emojis to your friends on iMessage.

You won’t need those anymore with iOS 10, since iMessage got a big reboot that includes a very fast search feature for photos to send.

So instead of sending emojis or text, you can reply with your favorite GIF.

And much to iOS’s credit, it found my favorite one on the first try.

You can also send a selfie to your friends right from iMessage. Besides its handy image-search feature, you can take a selfie or a normal picture right from iMessage.

Now when you hit the camera button, it brings up the camera itself to take a picture, or you can scroll to the right to grab stuff from your camera roll.

It’s not a game-changing feature, but it’s certainly going to save time for most people.

iMessage also has a new animated drawing feature so you can draw artwork with your finger and send it to your friends, but that’s not going to see much use until many more people upgrade. The Photos app has a new tab called Memories, and it automatically gathers some of your best moments from certain places and times.

Memories is a pretty cool feature for looking back at key points in your life, especially if you have thousands of photos on your phone.

If you click on one of the memories, it takes you to a photo gallery and features a video (with music) at the top. For my “Best of Last 3 Months” video, for example, it put in photos from different moments along with video of my son riding a bike for the first time without training wheels.

That was definitely the best moment. Nice job, Apple.

You can also find photos by location or by a specific person. Your photo albums have two new (and very welcome) additions: People and Places.

After a scan of all of your albums, iOS 10 will use the photo metadata to pin down where you took a picture so you can find it later on a map. Currently, you have to scroll by year and see vague references of where hundreds of photos were taken.

It also has facial recognition, so now you can click on your People gallery and look for pictures of yourself, your family, or friends.

You can access this in the Photos app by clicking on Albums.

You can finally delete many of the default apps from Apple. I had two folders on my iPhone called “Default Apps” and “Rarely Used,” and most would have been better in the trash.

iOS 10 lets you get rid of those potentially unwanted apps like Stocks, Find Friends, or Apple’s default email client.

Many people (like me) use third-party apps to replace Apple’s defaults, so this small change is great to see.

You can now clear all your notifications instead of having to go through them app by app. In the current version of iOS, you need to clear notifications for each app.

So if you have new text messages, a couple of new emails, and a news alert from The New York Times, you’re looking at around six taps just to get rid of notifications.

Many people asked Apple for a much quicker solution, and iOS 10 delivers.

Now, all your notifications will be cleared with just two taps.

Bedtime will track your sleep and wake you up with soothing sounds instead a jarring alarm. Apple updated its Clock app with a darker color scheme, but it has more than just new aesthetics.

The new Bedtime tab helps you make sure you are getting the amount of sleep you want and keeps track of it over time.

The feature can replace your daily alarm clock that has you jumping for the snooze button. Instead, its built-in wake-up sounds include “Early Riser,” “Birdsong,” and “Droplets,” which are a bit more gradual and less jarring ways to be woken up.

Below are some of the key enterprise features in iOS 10:

What we learned about agency transparency in 2015

ABOUT US
A source of tech reviews and digital trends. Breaking technology news, analysis, and opinions from digitalreview.co. A guide for all things tech. Consumer technology news and reviews. Your source for International Technology News, Business and Culture. Follow us for the latest news, reviews and other fun tech stuff. News, resources, inspiration and fun for the connected generation. Digitalreview.co covers the future of technology, science, art, and culture.
Contact us: [email protected]lreview.co
FOLLOW US
© Copyright © 2013. Developed by Eva Media, Inc. - All rights reserved