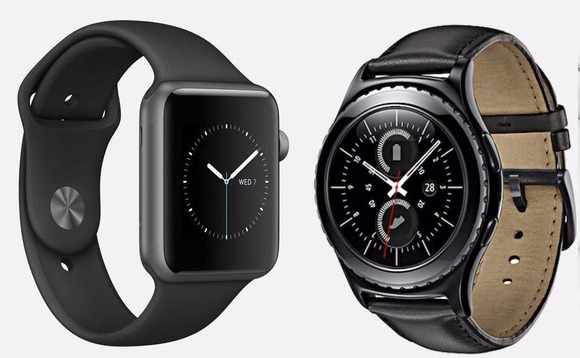 Battle of the next-generation smartwatches

According to V3, The wearables war has heated up with the unveiling of the Apple Watch Series 2 and the Galaxy Gear S3. We pit the two current kings of the smartwatch field against each other to see which comes out on top. Our battle was played out on paper, not a swimming pool …

The Gear S3 Classic is fashioned out of stainless steel and finished to a polished shine, while the Frontier has a matte black finish and puts out more of a journeyman vibe.

The Gear S3 Frontier is the bulkier of the two with a slightly larger, raised bezel. Both cases are 12.9mm thick, and weigh more than their Apple rivals, so you’ll certainly know you’re wearing them.

Samsung has kept things relatively simple, offering leather or silicon straps. But interestingly you can also use your own 22mm strap should you have an old favourite.

There are a dizzying array of styles and designs for Apple’s Series 2. For starters Apple offers two different watch face sizes, 38mm or 42mm. Some models are available only in one, some in both.

For an exhaustive list of the options we suggest you visit the Apple Store.

In terms of protection, the Apple Watch improves slightly on the first generation by upping water resistance to a depth of 50m. Spinning the Digital Crown wheel pushes out any water left behind using tiny vibrations.

Samsung’s effort could easily take Apple in a fight. Both models come with a MIL-STD 810G rating on top of IP68 certification. The ‘military’ grading covers devices that can withstand excessive heat and cold, pressure, shock and vibration.

There are a few differences in the display material with the Apple Watch. The steel and ceramic models have a tougher sapphire covering, while the others have glass. The only constant is the OLED screen used throughout the range. In comparison, the Gear S3 uses scratch resistant Gorilla Glass.

The Gear S3 has an always-on AMOLED display, while the Apple Watch uses Force Touch to enable pressure-sensitive taps.

Specs
The Gear S3 is powered by Samsung’s Exynos 7270 dual 1GHz processor with 768MB of RAM and 4GB of storage. There’s no additional card slot for expansion.

Both watches include GPS functionality, but only the Gear S3 Frontier has 4G LTE support.

The Apple Watch has a dual-core S2 chipset which Apple claims delivers a 50 per cent improvement in performance compared with the first model. No further technical information has been made available, but we do know that you get 2GB of storage for your iTunes library.

Samsung’s and Apple’s efforts both include heart rate sensors.

The latest version of the Tizen OS comes with several software improvements, some of which make greater use of the bezel to control the watch’s functions. Answering a call can now be achieved by turning the bezel to the left or right. Similar movements make it easier to navigate apps than having to swipe the tiny touchscreen.

The update to watchOS 3.0 has helped the Apple Watch carve out an identity, and realise its ambitions to be a fitness tracker. This time round there’s a Workout app that captures activities such as swimming. It will even tell you which stroke you did.

The GPS will visually trace your route during a bike ride or a run, and a new Breathe app taps into the new ‘mindfulness’ trend by encouraging you to take rests every once in a while.

Apple Pay is supported as standard.

Apple has not released details about the battery, but we’re told to expect five hours’ use with GPS enabled. There are some situations where this will be necessary, but the chances are you’re going to call on GPS less frequently, so you’re looking at a slower drain. Apple has said that you should expect to charge the device every night.

The 380mAh battery in the Gear S3 should provide three to four days’ use, although how this plays out in the real world remains to be seen.

Price
Apple’s Series 2 goes on sale on 16 September starting at £269 for the Aluminium model with Sport Band, rising to £1,049 for the Stainless Steel and Ceramic Space Black models.

Samsung has yet to announce UK Gear S3 prices, but US prices are expected to start at $299.99. There will also be differences between the Classic and Frontier models, along with the 4G LTE-enabled variant. We’ve heard rumours of a 4 November release date.

Summary
Apple’s timepiece is the only way to go if you want a smartwatch that really suits your style. The Samsung is tougher, but both have GPS and the ability to make wireless payments.

Apple’s new watch could lose out when it comes to battery life, but we’ll need to strap each of them round our wrists first before we form our final conclusions.

According to ChristianTimes,  Aside from being rivals in the smartphone market, tech giants Samsung and Apple continuously compete against each other in terms of next generation wearables. Both companies already revealed their new smartwatches, and many tech-savvy users agree that it’s a fierce competition between the two devices.

According to New Atlas, Apple Watch 2 has an advantage in terms of app selection due to its operating system’s (OS) smooth iOS integration along with an Apple-friendly approach. The Samsung Gear S3, however, runs on Tizen OS which becomes disjointed at times.

The Apple Watch 2 will offer two options for its watch face display: 38 mm 1.3-inch OLED with 38 mm: 340×272 pixels resolution or 42 mm 1.5-inch OLED with 42 mm: 390×312 pixels resolution. Other built-in features in the device include the heart-rate sensor, GPS, LTE and Wi-Fi connectivity, the accelerometer, 2 GB of music storage, plus a 5ATM water resistance.It has a battery life of up to 18 hours without being recharged and it will be run by Apple’s WatchOS 3 operating system.

Samsung, on the other hand, developed the Gear S3 with a 1.3-inch Super AMOLED watch face display with 360×360 pixels resolution, functioning with the previously mentioned Tizen operating system. The smartwatch also shares similar built-in features with the Apple Watch 2 including the accelerometer, GPS, a heart-rate sensor and LTE and Wi-Fi connectivity. Additionally, it offers an altimeter, built-in compass and IP68 water resistance. With regards to battery life and storage, Samsung Gear S3 seems to have an edge over its rival with its 4 GB of music storage space plus its 4-day battery life.

The Apple Watch 2 is priced at $399, but a $369 option will also be available. Meanwhile, the Samsung Gear S3 Classic and Frontier prices have yet to be revealed.

Apple is set to release the Apple Watch 2 sometime in September, while Samsung will begin shipping units of Samsung Gear S3 later this year.

In a year, Politico Europe grows to a 45-person newsroom