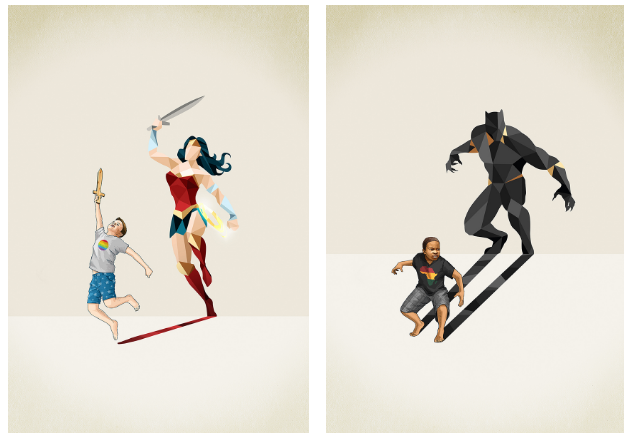 New York, NY  —  Following his inspirational “Super Shadows” collection, artist Jason Ratliff is back with a sequel series of artworks to inspire all children, everywhere.

Jason Ratliff wants to bring children hope, empowerment, and the idea that the impossible is possible. Possibilities are endless just like a child’s imagination…

ARTIST JASON RATLIFF REMINDS CHILDREN THAT SUPERHEROES ARE OF ALL RACES, GENDERS AND ABILITIES WITH HIS NEW ‘SUPER SHADOWS II’ SERIES

Curioos is very happy to add that 50% of all proceeds will be donated to Cook Children’s Medical Center in Ft. Worth, TX during the first 48 hours of the series launch.

Jason Ratliff unlocks the hidden superhero in every child’s imagination

A child’s imagination can be as boundless as a superhero leaping from rooftop to rooftop.

But in Super Shadows, Ratliff focuses on bringing to life “the inherent power of a child’s potential and imagination.”

The original work that inspired the series, entitled Hero, depicts a young boy with the shadow of Superman following behind him. Hero was originally part of Ratliff’s Walking Shadowsseries, but he received such a positive response to it, he created an entire separate collection.

Jason Ratliff (USA) is an artist and designer based in Indianapolis, Indiana.

Designer by trade, artist by heart. I aim to create works that charm. Playful explorations of mixing intricate illustrations of the mundane with smacks of color that breathe life.

Curioos goes beyond the digital art prints with die-cut aluminum prints. Curioos has experimented with other formats in the past, but its core product hasn’t changed much over the past few years. The New York-based startup sells art prints from digital artists. And it’s a great way to decorate your home or office. Curioos is taking this one step further with two additional formats.

Curioos has experimented with other formats in the past, but its core product hasn’t changed much over the past few years. The New York-based startup sells art prints from digital artists. And it’s a great way to decorate your home or office. Curioos is now taking things a step further with two additional formats.

These new formats aren’t a gigantic departure as they’ll still let you hang art on your wall. But they look and feel different as they’re made out of aluminum. Let’s start with the simple one.

First, you can now order disk prints on aluminum. As the name suggests, these are circular artworks without any frames or anything. Thousands of prints are available in this format.

But the other (and more interesting) format is the custom-shaped die-cut aluminum prints. These will look great on non-white walls as they’ll stand out. These are a bit harder to make as you need to have a single object of focus that you can cut out from the background. So it doesn’t make sense for any kind of art.

Some items already look great using this format. Artists can get creative, and it opens up a lot of decoration possibilities.

Like other Curioos products, artists get a cut on every sale. Curioos recently opened the doors of its marketplace, allowing anyone to submit wall art and choose formats. Curioos curators still have to approve the uploaded images before they go live on the website, but the startup tries to make this process as frictionless as possible.

Day in the Life: Walk a mile in Shingy’s shoes

This crazy YouTuber just beat ‘Dark Souls 3’… with his feet!