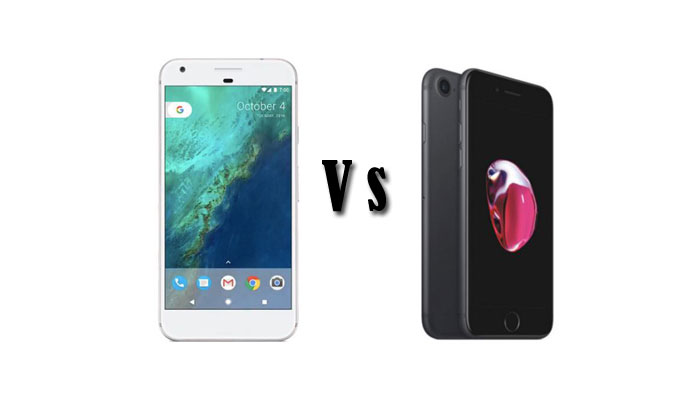 The valuewalk is reporting that last year Google surprised the world by scrapping its much-loved Nexus brand of handsets and releasing the Google Pixel and XL.

This action signaled an about turn from the search giant, one that would put it in direct conflict with Samsung. However, more importantly, the timing of the release of its handsets would pit them directly against Apple’s iPhone 7 and 7 Plus. So, now that the dust has settled and a new year is upon us. It is time to answer the following question: “Why choose a Google Pixel over an iPhone 7?”

Now before we begin talking about what is different about each handset, it’s worth us taking a look at what is the same.

Like Apple, Google entered the market with two handsets, the standard Pixel at 5-inches and the XL at 5.5-inches. Their approach to this is almost the same as Apple’s with 4.7-inch and 5.5-inch devices. Furthermore, when it comes to marketing their devices both companies claim the following:

So now that we’ve got the similarities out of the way let’s have a look and what’s important…the differences.

If you haven’t been living under a rock, you will know that with the iPhone 7 design Apple decided to stick with what it knows. Yes, there have been some changes, such as the Antennas being moved, the inclusion of a capacitive home button. And last but not least the 3.5mm headphone jack removed. However, overall the iPhone 7’s design offers nothing new, and remains a brittle device that many fear of dropping!

As for the Google Pixel, the search giant got into bed with HTC as a production partner. This and the short turnaround time from concept to product forced it to keep what worked from the Nexus line. So, as far as design is concerned it’s functional at best, which means the iPhone 7 is better looking. However, if spending hundreds of Dollars on an iPhone 7, that if dropped almost certainly means game over (depends on the height,) scares you! We would recommend the Pixel due to it being protected by Gorilla Glass 4.

Siri has been around for years now, and while Apple has made changes which allow third-party integration. That doesn’t mean she’s intelligent. In fact, if you were to ask a question, instead of receiving an accurate response she provides links. In comparison, the Google Assistant, which comes pre-installed into the Google Pixel is a real AI. As not only does it understand the context of what you ask it, but it also recognizes and understand regional language differences. Meaning that no longer will you have to struggle to get your handsets assistant to do as you ask!

Starting with the iPhone 7, it comes with a 4.7-inch LCD Retina display offering a resolution of 1,334 x 750 resolution. While the Pixel has a 5.0-inch AMOLED full HD display, which as you would expect provides a superior 1,080 x 1,920 resolution. Now if you prefer to judge a smartphone display by its PPI or pixels per inch, here’s the detail. The iPhone 7 comes in at 326ppi while the Pixel has an impressive 424ppi, meaning that its display is not only sharper but also more vibrant and colorful.

However, that’s not all; the Google Pixel is also capable of providing users with VR experiences when coupled with Google’s Daydream headset. And that’s thanks to its high-resolution display, which is why we would recommend this handset.

Compared to their larger counterparts the battery life on both the iPhone 7 and standard Pixel are inferior. However, when directly compared it is the smaller Pixel that comes out on top. If like many, you always have your handset switched on and consider yourself to be a heavy user. You can expect the Pixel to provide around 20% more on time!

After looking for reasons as to why a consumer should buy a Google Pixel over the iPhone 7. It seems as though the reasons above provide a real argument as to why. As it would appear that the Pixel has much more to offer than the iPhone, which includes, a superior display, battery life, and design. As well as, easier navigation, sharing, an open app ecosystem, and a smarter AI assistant.

Apple fires back, says Spotify is asking for ‘preferential treatment’

App changelogs should be useful, not easter eggs or boilerplates