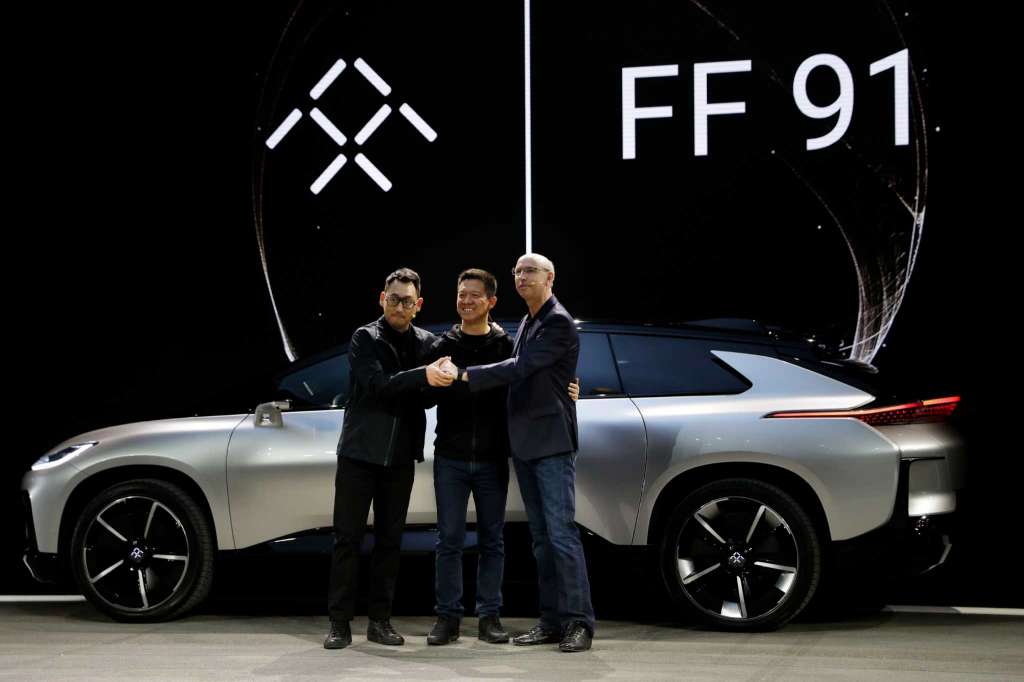 The electric car revolution is missing a barf bag. Too bad. You’re about to need one.

On Tuesday night, Faraday Future—an aspirant Tesla competitor very much on the rise—debuted their FF 91 electric car at CES in Vegas. The car looks pretty amazing. But the presentation overflowed with enough meaningless tech jargon to fry your motherboard, or make you roll your eyes right out of your head.

OVER THE COURSE OF THE 70 MINUTE SHOWCASE, FARADAY REFERRED TO ITS RIDE AS

Over the course of the 70-minute showcase (which you can watch below), Faraday referred to its ride as:

(If you haven’t yet heaved, Quartz‘s Mike Murphy collected more.)

And again: Mashable saw the FF 91—an all-electric beast that can drive itself—and, yeah, we were impressed. It’s neat-looking, and theoretically emblematic of the future for automobiles. The car’s connected to the internet, it doesn’t require fossil fuels, and it knows how to drive itself without crashing.

It should go without saying, but the future of transportation is the future of our economies. Driverless trucks, for example, are the first dominos that could topple 3.5 million jobs in the United States, to say nothing of ripple effects that will spread to local businesses, towns and cities.

Tech companies do this routinely. Press events like this exist to exaggerate and sell products. (If you’ve forgotten the drama of Steve Jobs introducing the iPad as “the best browsing experience you’ve ever had,” remind yourself.) Of course, unlike Faraday Future’s FF 91—and its competitors—the iPad was never poised to change the planet.

Faraday just introduced a car with the power to change how we live our lives, and it failed, spectacularly, to speak in clear terms about the responsibilities it shoulders as a result. Everything was about the virtues of artificial intelligence (which nobody asked for) and the virtues of connectivity (which, especially after the last year, we’re routinely exhausted by now).

Of course, Faraday’s not alone in this. Facebook, for example, has connected well over a billion people, and makes constant mistakes in pursuit of its goals. They’re the kinds of mistakes that would mystify any user who doesn’t understand that their personal data is being ingested and served by artificial intelligence every time they use the News Feed.

Startups grow into giants with blurry vision, trampling and reshaping the landscape of society underfoot. Tech corporations that aspire to, can, and very possibly will change the world? They could probably learn a thing or two from actually living in it. Or at least speaking like they do.

Of course, Faraday’s moment may be a bit further off than we think. Its car didn’t work during a live presentation of the automatic valet feature, after all:

Should you be curious about investing in them regardless, Faraday Future was happy to provide all the info you need.

“The FF 91 will usher in a new age of connected vehicles and break down the boundaries of what a vehicle can and will be. This mindset is deeply rooted in the soul of our company, in creating a new age also of car-buying,” Sampson said.

“In owning an FF 91, you’ll be joining a new alliance to ignite technology revolutions and protect the planet Earth. The first step in turning this message into a movement is to register on FF.com.”

It’s fitting, no? Getting you one step closer to buying one of their cars also happened to be the most concise, plainly-spoken thing said by Faraday all night.

Inside Your CRM: Top Secret Ways to Create Viral Content