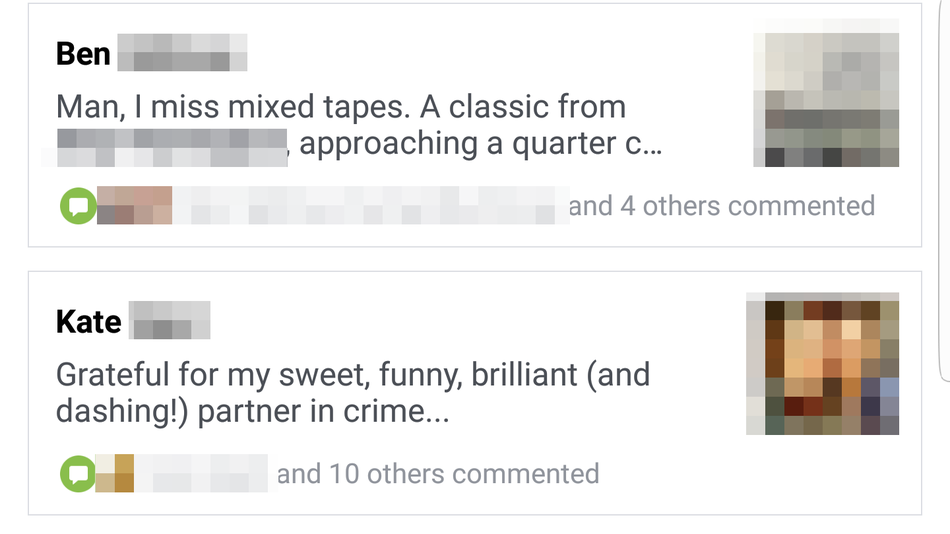 Facebook really, really wants you to talk to your friends.

The company is testing a new feature — “What friends are talking about” — in some News Feeds. Mashable spotted it Friday in the Android version of Facebook’s mobile app, though it’s possible other users on different platforms may have seen it earlier.

A little more bang for your buck

The feature collects posts from your friends in a special section of your News Feed, just a little bit down from the top, and highlights how many comments the content received from other people. It’s roughly the size of one image post in your News Feed, meaning you get a little more bang for your buck.

Here’s what it looks like — note that we’ve redacted names and profile pictures:

Facebook often tests features like this with small groups of users. For example, it rolled out a tweaked version of the Trending feature to some users in June beforedebuting it publicly last week. Of course, there’s no guarantee that test features will roll out to everyone.

Facebook did not immediately respond to Mashable’s request for additional details on Friday.

You can see more on your screen

Earlier this summer, Facebook said it would prioritize posts from family and friends over content from brands: It’s unclear if this new module is related, though it does seem like a good way to encourage people to interact with one another. It piles updates into smaller chunks so you can see more on your screen — essentially meaning more opportunities for you to comment on something without scrolling.

Getting friends to talk to one another is mission number one for Facebook, which has recently ceded ground to Snapchat and more “intimate” platforms like its own Instagram product.