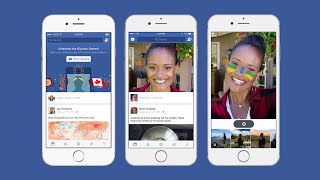 Soon after incorporating a very Snapchat-like Stories feature into Instagram, Facebook is taking a similar approach with its main app.

Basically the latest Facebook test places a camera on the proverbial front page of its mobile app. Like, really front and center – it’s taking up the space where you normally type in statuses (which is now pushed down a notch).

In other words, the drunk Facebook status is a thing of the past – just imagine all the accidental drunk pictures and video people will take now.

It’s not just the instant camera that apes Snapchat though; Facebook is putting its MSQRD purchase to work and incorporating its photo and video effects right into the camera.

According to TheNextWeb, Facebook is clearly getting antsy about Snapchat’s continued growth and engagement among the youngins – by copying some of Snapchat’s best features, it gives them one less reason to go elsewhere.

And though the test is currently only available in Canada and Brazil, these ‘tests’ have quite the tendency to make their way into everyone’s phones eventually.

4th of July by the Numbers [INFOGRAPHIC]