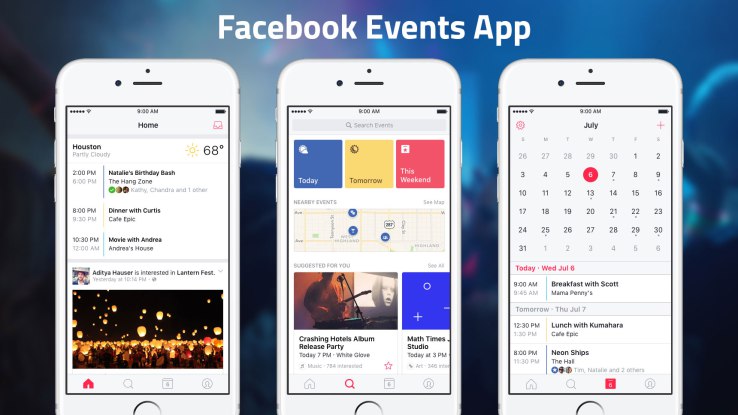 Facebook has such an enormous audience that even minor features still wind up with tens of millions of users. The app’s Events feature, which Facebook says now has more than 100 million daily users, is one of them. Today, it’s graduating to a standalone app of its own. Facebook Events is now available for iOS, and is coming to Android soon.

Just as in the mobile and desktop versions of Facebook, Events lets you browse upcoming events in your town, say that you’re going, and then stay home and watch Netflix instead. It opens to a feed of events that friends say they’re going to or simply “interested in.” If you follow any commercial pages that have upcoming events, they’ll show up in the feed too, along with news from events you’re already planning to go to.

According to TheVerge the app lets you browse events based on when and where they’re happening, or your personal interests, via search and an interactive map. There’s also a calendar feature to prevent you from double-booking yourself — and you can add other calendars from services including Google and Apple’s iCloud, giving you a better look at your day at a glance.

What’s the point of Facebook Events? The company often likes to spin out core features when they become successful, in the hopes that they will grow faster once they become dedicated single-purpose tools. (See also: Facebook Messenger.) This also gives the company a better chance to make money off them — Messenger is pursuing various forms of e-commerce, and it seems likely that in time Events will too. (Who would be sad if Ticketmaster went away?)

There’s no option to buy tickets in the app just yet, but spinning out Events is a strong suggestion that’s coming soon. Until it does, I don’t see much point in downloading an app that does little more than provide an alternate UI for a relatively little-used corner of Facebook. But if you’re curious, you can find it here.

Review: Satechi’s USB-C 3-in-1 Combo for MacBook is the hub you’re looking for