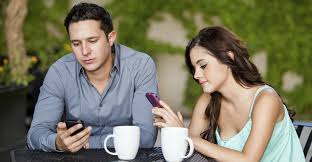 How you use social media can show up a lot of things about you, thanks to the mounting research into the psychology of social media behaviour.

Here are some findings on why couples who share more online are less happy,.

It might just have you backing away from your phone:

1. People who post more often are more likely to be psychopathic

A study last year, based on a survey of 800 men, found that narcissism and psychopathy predicted the number of selfies people posted on social networking sites, and how much the images were edited.

Posting, tagging and commenting on photos on Facebook are associated with narcissism for both men and women, according to a study of 410 participants.

For women, status updates were also linked to these traits.

Happy individuals make for happier couples, and happier individuals use Facebook less often, according to research.

One study in Denmark found that participants who went without Facebook for a week reported being significantly happier than the control group, who carried on using it as normal.

Another study found that spending more time on Facebook was linked to worse psychological health.

Researchers found this was because people spent more time negatively comparing themselves to others.

One study found that couples who post often about their relationships are more likely to be feeling insecure.

Researchers from Northwestern University surveyed more than 100 couples, and found that people posted more on social media about their partner when they were feeling insecure in their relationship.

5. And those who post more often depend on their relationship for happiness

Research from Albright College found that people who had what’s called ‘relationship contingent self-esteem’ (an unhealthy form of self-esteem that depends on how well your relationship is going) post mushy and smug updates on social media.

So there you have it. Time to log off and go for a romantic walk with your partner.

Maybe take a picture of that beautiful sunset and stick it on Instagram instead.

Why Y Combinator alum Themidgame is heading back to Chile

The bubble burst: Apple Q2 2016 revenue and device sales are down

Are You Sitting Right Now? Check Your Posture With This Infographic