News publishers have been on overdrive since the Brexit news hit, and a lot of them continue to break internal traffic records.

Alongside its mobile apps and websites, the BBC went deeper with social tools like Facebook Live and Snapchat.

Digiday caught up with BBC News social media editor Mark Frankel, to hear more on its social distribution plans throughout its Brexit coverage.

To stay focused on the topics people most cared about, it monitored Google Trends. Roving reporters then used those when interviewing across the country. That’s led to Facebook Live content including: “NHS in Somerset,” “What is Brexit in Liverpool,” “Immigration in Nottingham” and this example asking who can Vote in Edinburgh.

The BBC’s been testing different editorial formats for Facebook Live videos for the last seven months. The Brexit vote outcome left many Brits unclear on what the future holds.

The broadcaster tapped into that need, assigning a Reality Check Team: a group of experts assigned to answer all questions with hard facts relating to the Referendum. 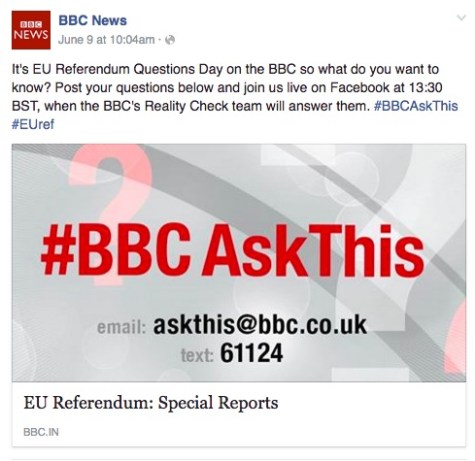 They’ve featured in much of the BBC’s social content. The BBC teased some of its Live videos on Facebook, urging people to post questions for the Reality Check Team to answer via the Live stream later that day.

Other more typical broadcasting techniques have also worked well. BBC reporter Adam Fleming gathered reaction outside Westminster after the news that Tory politician and prime Leave campaigner Boris Johnson announced he was halting his bid to be the U.K. prime minister. The video, had accrued 106,000 views within 24 hours. All videos have had anywhere from ten, to hundreds of thousands of views.

“What we get from Facebook is some very interesting analytics around the level of views and number of people watching with the sound on or off, and how long they stay. What we’re still lacking and hope to get is more analysis on those that are returning, their gender, location, there’s lots more data we could get, which would be very useful,” said Frankel.

Crafting live Snapchat stories.
The BBC isn’t a Snapchat Discover partner, though the platform is still part of the mix. “Our approach through the Referendum was to get under the skin of the story when appropriate,” said Frankel. 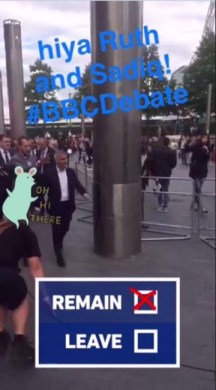 It published snaps on the nights of each of the big televised debates, which culminated in the “The Great Debate”, at Wembley Arena on June 21.

A producer was assigned to the platform and created a mix of images, emojis, and video all revealing behind-the-scenes details.

“We snapped throughout the buildup of the event, how it unfolded, and behind the scenes, so crafted a live story,” said Frankel. It then promoted the Snapchat content via its other platforms. 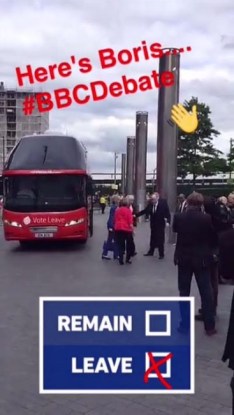 Snapchat data is hard to come by, though more is made available to Discover partners. “We get that some of our audience are very interested in that space. But we recognize there’s nothing we can link to, and there are limitations with it because we can’t feature it in a way that drives people back to BBC content,” said Frankel. “It’ll be interesting for us to see how the platform develops and evolves.”

Frankel is also confident the BBC isn’t cannibalizing its audience from other platforms, but attracting totally new audiences. “You don’t get a lot of analytics unless you’re a Discover partner, but you can see that the stories are being well watched.” 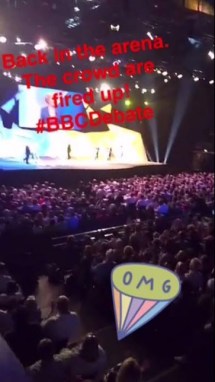 Snapchat lends itself well to content that makes the reader feel they’re being given an exclusive, intimate look inside an event. Some of the BBC’s most popular snaps featured images and videos of those taking part in the debate while they were in the make-up room ahead of their stage appearance.

Twitter and YikYak
Twitter has of course had a big role in the BBC’s coverage, although the broadcaster decided to automate a lot of its data updates via the platform so as to free up its resources to focus on other areas. The broadcaster set up the account @BBCReferendum, which pulled in graphics relating to all the new updates and facts emerging in the aftermath of the vote. It generated just under 50,000 followers.

The BBC has also been experimenting with content on U.S. app YikYak since earlier this year. Here the Reality Check team has also come into play.

Similar to the Facebook Live videos, where people were encouraged to send in questions ahead of the Q&A, and then the Brexit-facts experts were armed with the answers. So far it’s done a handful of Q&As, with each generating hundreds of questions and comments, all from a college-age audience.

Images: courtesy of the BBC.

The post Inside the BBC’s social distribution strategy for Brexit coverage appeared first on Digiday.

Marc Jacobs is the latest fashion brand to join Snapchat

Day in the Life: What Burger King’s community manager does

Chris ‘moot’ Poole on 4Chan surviving without him