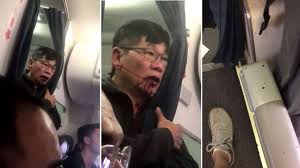 According to the Independent’s news, United passenger says ‘Just kill me,’ as he drools blood in new video.

New footage has captured the moment that a doctor who was violently yanked from his seat on a United Airlines plane and dragged along the aisle told airline staff “just kill me”.

The world reacted with outrage and concern after the initial videos, captured by horrified passengers, showed several police officers forcing the man out of his seat, ignoring his cries and pulling him by his hands along the floor of the plane.

The new video shows the man, clearly distressed, clinging on to the curtain which separates the plane compartments, blood streaking his face, repeating the same words over and over.

Although his words can be heard relatively clearly in the video, it was unclear if he was trying to explain that staff had “tried to kill him”.

The airline released an initial statement to explain that the United Express Flight 3411 in Chicago was fully booked and that staff asked for “volunteers” to take another flight.

It later came to light that passengers were removed so that the airline’s own staff could take a seat.

When too few volunteers came forward, law enforcement was tasked to select random passengers and force them off the plane.

United Airlines CEO Oscar Munoz issued a longer statement to apologise for “the upsetting event” and to say the company was in contact with the passenger to “resolve the issue”.

He also apologised for “having to re-accommodate these customers”.

The statement did not directly apologise to the passenger who had been manhandled and had his lip burst in the process.

Another video shows the male passenger walking up and down the aisle saying “I want to go home”.

“While I deeply regret this situation arose, I also emphatically stand behind all of you, and I want to commend you for continuing to go above and beyond to ensure we fly right,” Mr Munoz told employees in a separate note.

“I do, however, believe there are lessons we can learn from this experience, and we are taking a close look at the circumstances surrounding this incident.”

The airline account of the incident accused the man of being “more and more disruptive and belligerent”, raising his voice and repeatedly declining to leave the plane.

The account insisted he had been asked to leave “politely” and also accused the passenger of “running back onto the aircraft in defiance of both our crew and security officials”.

One of three of the law enforcement officers involved has been placed on leave as he did not follow protocol, according to the Chicago Department of Aviation

After the video was initially shared on Twitter, United responded with a tone-deaf statement about why an overbooked passenger was removed:

Statement from @United Airlines CEO Oscar Munoz: “I apologize for having to re-accommodate these customers.”

That's one way of putting it. pic.twitter.com/Jq7VGoYv8Q

United Airlines CEO (the recently-crowned PRWeek Communicator of the Year!) Oscar Munoz later issued a statement, apologizing for the overbooking, but not beating up a paying customer:

Chicago Police also issued a statement with their version of events, which claim that he “fell,” and his head “subsequently hit the armrest.” That’s, uh, some strong alternative facts right there.

According to the statements and reports that we have currently, it would appear that the United flight was full, but four United employees needed seats on the flight. So, the airline initially asked for volunteers, offering up to $800 in vouchers, a hotel room, and a flight home on Monday afternoon.

Having found no volunteers, they then proceeded to choose passengers at random and remove them. One couple left without incident, but the second couple picked was a 69-year-old Asian doctor and his wife. He claimed he needed to be back home the next morning to see patients, so refused to leave, at which point police officers were summoned.

Update: According to a report from an ABC reporter, one of the police officers involved in the removal has been placed on leave:

BREAKING: One of the officers who removed the passenger from United flight has been placed on leave effective today. pic.twitter.com/N5JZIdo4IQ

iTunes Match via Apple Music isn’t an improvement, and may ruin your existing library

‘Hello, World!’: Learn how to code with TNW Academy

The 4 Rs That Show a Brand Your Blog is Influential