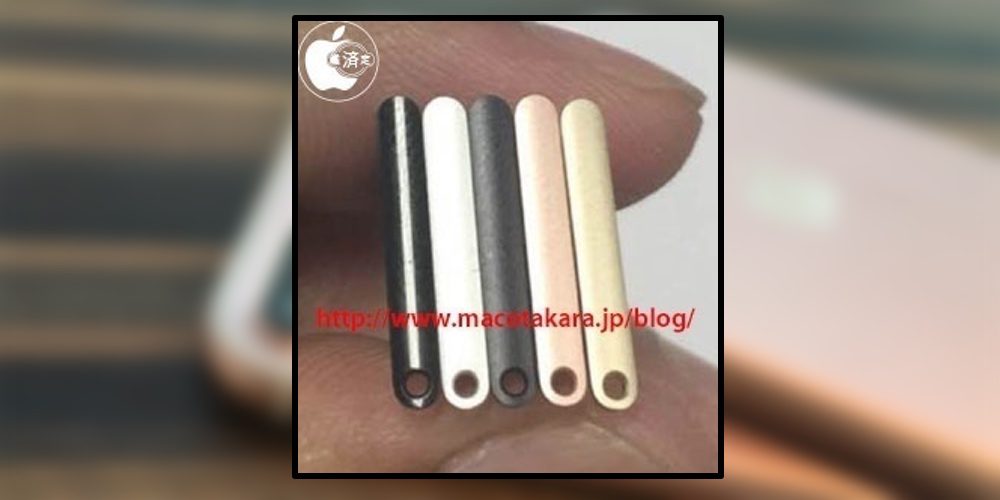 A weekend report from KGI is shining some last minute details on the iPhone 7. 9to5Mac publishes KGI this report. As well as reaffirming everything we’ve already heard, such as the design resembling the iPhone 6s with tweaked antenna lines, the report includes some specific details about certain changes.

KGI says that the iPhone 7 will include the new Apple A10 SoC, which will be CPU clocked at up to 2.4GHz, a dramatic increase over the existing A9 silicon. The iPhone 7 will also come in two new color options which KGI describes as “dark black” and glossy “piano black”, replacing space grey. There are also changes to the speaker system, Force Touch sensors, waterproofing and more. Many details after the jump, including an explanation of what the iPhone 7 Plus dual-camera system comprises …

How many colors will be offered?

KGI’s Ming-Chi Kuo says that the iPhone 7 will be offered in two new case colors which are called “dark black” and “piano black”. Space Grey — as it is exists today — will be removed from the lineup meaning iPhone 7 and iPhone 7 Plus will be offered in a total of five colors. The piano black is described as glossy and corroboratesleaked SIM trays seen previously (pictured above). Due to low yield, piano black may only be offered exclusively on high-capacity iPhone 7 models, at least at first.

In terms of the internal performance, the report claims the iPhone 7 will be powered by a new Apple A10 chip manufactured by TSMC using a new ‘InFO’ process. Apparently, this chip will be a major upgrade over the Apple A9 chip seen in the iPhone 6s with maximum clock speed hitting 2.4 GHz.

The iPhone 7 screen display will also be getting an upgrade. Although size and resolution are staying the same, at 4.7 inches and 5.5 inches, the displays will ‘copy’ the visual features of the 9.7 inch iPad Pro. This means the iPhone 7 display will be able to render wide-color imagery. This will help boost the appearance of the photos taken by the new cameras in the iPhone 7.

Will be camera getting an upgrade?

The 4.7 inch iPhone 7 camera will be getting an upgrade but this KGI report focuses on the brand-new dual camera system which will be exclusive to the iPhone 7 Plus. The report says the dual camera will enable optical zoom and ‘light field camera applications’. The dual camera is made up of a wide-angle camera and a telephoto camera. Both cameras will feature 12 megapixel sensors. The larger camera will also feature optical image stabilisation and a 6P lens. This is markedly different technology to what Huawei uses in its dual-camera adorned P9 phone — it’ll be interesting to see what Apple demos on Wednesday in regards to image quality.

Memory and RAM will be increased

Apple is also including a new camera flash component in the iPhone 7 to improve photos taken in low-light situations. Apple will be boosting the number of LEDs from two to four (two cool, two warm) to create a more effective True Tone flash in the upcoming handsets.

Memory and RAM will also be increased. KGI says Apple will drop the 16 GB and 64 GB offering and add 256 GB storage tier. The new lineup will feature 32 GB, 128 GB and 256 GB models. The company will also bundle an additional 1 GB of RAM for the iPhone 7 Plus which is necessary to handle with the advanced camera processing provided by the dual-camera (an iPhone 7 Plus exclusive feature). Therefore, the 5.5.inch iPhone 7 Plus will include 3 GB RAM whereas the 4.7 inch iPhone 7 will feature 2 GB RAM – the same as the iPhone 6s.

Agreeing with a leaked spec sheet from a few days ago, KGI says that Apple will include Lightning EarPods and a Lightning to 3.5mm Headphone Jack adapter with every iPhone 7. This is to compensate for the lack of 3.5mm headphone jack in the hardware itself. KGI says that that space will be used to enhance the Force Touch recognition system. On the outside, it will look like a second speaker grille but it will actually house a new sensor to improve the ‘Force Touch user experience’. Apple is adding a new internal amplifier to boost sound output from the phone’s receiver.

New iPhones will be waterproof

KGI also claims the proximity sensor component is also getting a upgrade (‘switching from LCD to laser’) with faster response times and longer recognition distance, with support for hand-waving gesture features. The inclusion of such gestures is not confirmed, however. The new iPhones will also be waterproof with an IPX7 rating, this is the same as the Apple Watch. This rating means the hardware will be able to withstand immersion in water up to 1 meter for up to 30 minutes. According to KGI, Apple’s high standards for waterproofing have impacted the supply chain and lowered total production of iPhone 7.

It is forecasting 65 million iPhone 7 units shipped by the end of the year, a significant decrease below the 82 million level set by the iPhone 6s in the same timeframe last year. KGI blames poor assembly yield and “limited innovative selling points”. Although there are lot of changes to be seen, the analyst expects customer to focus on the new black color options, the dual camera, water resistance and the removal of the headphone jack.

Thanks to Reddit, I put myself on every government watchlist known to man —...