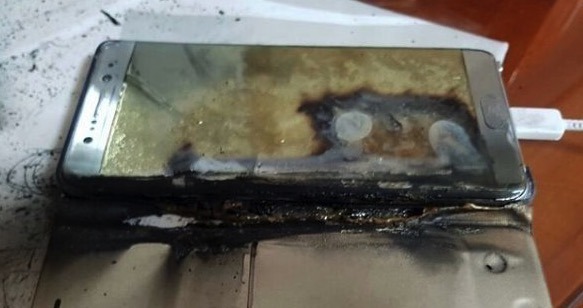 A Chinese man reported that a Note 7 smartphone from Samsung Electronics Co. exploded after he bought it this week, raising questions about whether the South Korean company’s problems with battery fires are spreading to newer versions of the premium device.

The 25-year-old customer, Hui Renjie, said his Note 7 exploded Monday morning, less than 24 hours after he got it delivered from e-commerce website JD.com Inc. He said the incident caused minor injuries to two of his fingers and burned his Apple Inc. MacBook. A Samsung representative visited him soon afterward and asked to take away the phone, he said, but he declined the offer because he doesn’t trust the company to reveal the reason for the fire, and plans to publicize the issue.

What’s the cause of the battery fires?

“We are currently contacting the customer and will conduct a thorough examination of the device in question once we receive it,” the Korean company said in an e-mailed statement.

Samsung has been engulfed in perhaps the worst crisis in its corporate history after Note 7 smartphones began to burst into flames just days after hitting the market in August. The Suwon-based company announced Sept. 2 that it would replace all 2.5 million phones sold globally at that point. Samsung said it had uncovered the cause of the battery fires and that it was certain new phones wouldn’t have the same flaws.

The latest China incident however raises the prospect that Samsung has battery problems with Note 7 phones now hitting the market, adding the risk of further recalls and potential brand damage. Analysts have estimated that the original recall would cost the company $1 billion to $2 billion.

Samsung’s business in China will only get worse

The sporadic reports of phones bursting into flame are unlikely to do its business any favors in China, where it’s already slipped out of the top five and lost market share Huawei Technologies Co., Xiaomi Corp. and other manufacturers. Samsung examined two Note 7 devices bought online in China earlier this month that ignited in users’ hands, but determined that heat had been applied from an external source and that batteries weren’t the cause of the fires.

“Samsung’s business in China will only get worse,” said Greg Roh, an analyst at HMC Investment Securities in Seoul. “Samsung may have to sacrifice massive marketing costs in China to win back its customers.”

Samsung’s lack of coordination with regulators

The original Note 7 fires came after Samsung decided to rush the device to market to take advantage of what Korean executives thought would be a mediocre iPhone 7 from Apple, Bloomberg News reported last week. Top executives were convinced the Note would dazzle consumers and they pushed suppliers to meet unusually tight deadlines, despite loads of new features, people familiar with the matter said.

For a Gadfly column on Samsung’s strategic challenges, click here.

Samsung drew criticism for the recall as well as the battery fires. The company announced replacement plans publicly before working out how millions of consumers in 10 countries would actually get replacements. Consumer advocates in the U.S. voiced concerns that Samsung’s lack of coordination with regulators risked causing confusion.

On Tuesday, Samsung said that 60 percent of the recalled Note 7s have been exchanged in the U.S. and South Korea. About 90 percent of users have chosen to replace their recalled devices with a new Note 7, the company said.

WTF: What Brexit means for the UK media industry

21 Of The Most Powerful Quotes On Eating A Healthy Diet