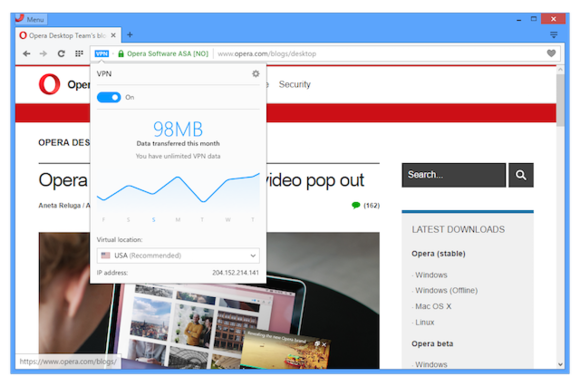 According to PCWorld, Opera says its VPN service exists as an independent company, operating under strict Canadian privacy laws.

In April, Opera added a free, unlimited VPN to the developer edition of its browser. Now, the company has brought that same capability to the stable version of its Opera 41 desktop browser.

While some other VPN services charge for letting you surf anonymously across the web, Opera’s service is both free, unlimited, and built right into the browser. There are no restrictions on bandwidth, though you’ll have just a few locations to choose from when deciding on your VPN endpoint.

A VPN works by providing a secure, encrypted tunnel between your computer and a website or remote server—Opera uses a 256-bit AES encrypted connection.  Another advantage is something Netflix users have known for years: By choosing a foreign endpoint, a user can virtually “place” himself in that country, allowing his PC access to content that would otherwise be off limits. (Netflix has moved to crack down on this practice, however.)

Why this matters: Opera represents just a tiny fraction of the browser market, but the company has been impressively aggressive in rolling out customer-friendly features: native ad blocking, battery saving, and more. In some ways, the company is the T-Mobile of the browser world, attempting to upend more-entrenched competitors by giving customers a number of tantalizing free features.

To enable the new VPN service, first ensure you have the latest version of Opera. If you don’t see the VPN icon in your address bar, you will need to make sure the VPN option is toggled on in Settings. Now click the VPN icon in the address bar to reveal its settings.

You will see that the VPN service is on, as well as how much data has been transferred this month. You can select from a list of five locations for the endpoint, including Canada, Singapore, and Germany. You can also select an “Optimal” endpoint, which allows Opera to select the VPN endpoint based on the network speed, latency, location, and server capacity.

Don’t be surprised if your bandwidth drops as a result of enabling the VPN, however. We measured how fast PCWorld.com loaded with and without the Opera VPN enabled, as well as using the various endpoints. Not surprisingly, we found that VPN performance seems to be affected by the round-trip distance, with overall page load times taking more than three times as long with the VPN than without it. (See chart below.)

Note: We used Opera’s existing, VPN-enabled developer browser for testing, and measured the page-load times using Opera’s built-in tool to load the same page with and without ads, simultaneously. Though we were measuring a live site, with theoretical variations in the ads displayed, we’re assuming a consistent experience. Your results may vary, however, due to changing conditions in network traffic and available server resources.

As we proved during the Olympics, however, using a VPN does have its benefits. While broadcasters such as the BBC ask visitors to confirm whether they’ve paid their TV license fee, other sites, like the CBC, don’t seem to mind.

Is it truly private?

One concern, however, is whether your surfing habits will be truly anonymous. Opera was purchased by a Chinese conglomerate earlier this year, and there will always be some portion of the internet that believes that the Chinese government is peering over the shoulder of every Chinese product.

When asked for comment, an Opera spokesman specified that the VPN is a no-log service, which means that no user data is collected. “The service is provided by SurfEasy Inc. which is a Canadian company that has not been acquired by the Chinese conglomerate,” he added in an email. “SurfEasy acts under strict Canadian privacy laws.”

“While Opera has been purchased by a Chinese company, the browser will continue to be owned by a Norwegian company, which acts under Norwegian and European privacy law.,” the spokesman added. “This means very strict regulations regarding use of private data.”

SurfEasy also offers a paid service for Chrome and other browsers, which provides unlimited bandwidth for a monthly fee. Historically, the paid service has offered a greater number of endpoints and faster performance.

Do you have to use Opera’s new VPN if you use the browser? Nope. In fact the performance penalties suggest that enabling Opera’s new VPN on a 24/7 basis probably doesn’t make sense. But when you need to, combining private browsing (CTRL + Shift + N within Opera) together with the new VPN tunnel is a pretty good assurance that your online activities won’t be tracked.

The iPhone 7 creates a complex set of problems for consumers

UberSELECT hits San Francisco for those times you don’t want to ride in a...