Digital Review
Home Digital Marketing Pinterest Video: It will have its own native video tool 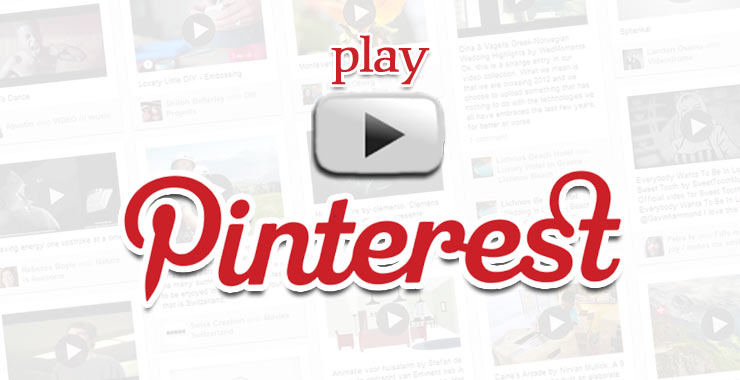 Pinterest Product Manager Steve Davis announced that the platform will soon be rolling out its own native video player. Video has been a growing medium on Pinterest, with a 60% increase in videos saved by users over the last year, according to the company. Pinterest Native Video Coming Soon – Here’s a First Look.

If you’re not utilizing video on social these days, you’re falling behind. Earlier this week, LinkedIn unveiled the first stage of their native video option, leaving only Pinterest among the major social platforms to not have its own native video tool.

That’s about to change – in a blog post today, Pinterest Product Manager Steve Davis announced that the platform will soon be rolling out its own native video player.

Here’s how it looks:

As with all social platforms, Pinterest has seen massive growth in video demand. As noted by Davis:

“In the last year alone, we’ve seen a 60% increase in videos on Pinterest, with workouts, home projects and hair & beauty tutorials topping the charts.”

And that’s functional enough, but as you can see from the example, the new native video option is more integrated into the actual Pinterest process, providing easier and more appealing ways to present video content on the platform. And they also, of course, keep more of your activity on Pinterest, as opposed to the platform working as a third party link provider.

Pinterest does also have Cinematic Pins which function kind of like video, in that they move as you scroll.

But they’re more akin to GIFs than actual video – given the numbers noted above, it’s clear that Pinterest needs its own native video option in order to meet user demand and provide more compelling options for advertisers.

In the announcement post, Davis also says that they’re working on new personalized recommendation tools to help users discover videos they’re interested in, while they’re also developing additional video enhancements which will be rolled out over the next few months.

Pinterest aims to be generating around $2.8 billion in annual revenue by 2018

It’s another step in Pinterest’s journey towards maximizing the platform’s monetization potential. Documents released last year showed that Pinterest aims to be generating around $2.8 billion in annual revenue by 2018, up from a reported $169 million they made in 2015. To achieve this, the Pinterest team has been busy adding a range of new features to up its e-commerce potential, including buyable pins, improved search and discovery features, an upgraded mobile app and new remarketing and custom audience ad targeting tools.

Given the rise in video consumption, the addition makes sense, and will move the platform that little bit closer to their wider business goals. / Read more at: http://www.socialmediatoday.com/social-networks/pinterest-native-video-coming-soon-heres-first-look

In the last year, users have saved 60% more videos, the company says.

Video: Everyone is doing it, and so is Pinterest now.

The San Francisco company, whose service is best known as a way to collect online photos of cakes and the perfect throw pillows, wants to improve its users’ experience when it comes to video. On Tuesday, Pinterest revealed that it’s planning to debut a native video hosting tool in a few months. At first, it will be geared toward companies and experts so they can create and share how-to videos, according to a company spokeswoman.

Video has been a growing medium on Pinterest, with a 60% increase in videos saved by users over the last year, according to the company.

To take advantage of this surge in videos on its service, Pinterest also says that it’s starting to bolster its video search and recommendation technologies to help users find and discover videos better.

The company’s new focus on video comes at a crucial time. Though it’s been able to grow to more than 100 million monthly active users, Pinterest now has to turn them into revenue. In 2014, it introduced its first ads, in the form of promoted pins, and has since added other revenue sources like e-commerce.

As other social media companies like Facebook and Twitter have shown, video has become the next media frontier. With the higher ad rates it commands and consumers’ increased ability to watch videos even on mobile devices (thanks to faster and cheaper Internet service), it’s no surprise companies are turning to video as they seek more revenue.

In the case of Pinterest, how-to videos made by experts and partner companies are a logical first step. According to a survey of consumers who watch videos on their smartphones conducted by the company, people are more than twice as likely to “take action,” such as following a dish recipe or trying out a craft project, after watching a video on Pinterest than any other site. Capturing its users’ attention with video to this degree could prove quite valuable to advertisers, and hosting its own videos natively will mean that Pinterest can place ads over them.

Last week, Pinterest underscored its commitment to growing its advertising efforts when it announced it has hired Gunnard Johnson, previously at Snapchat andGoogle, to lead its user and advertising measurements team. / Read more at: http://fortune.com/2016/08/04/pinterest-video-focus/

What Victoria’s Secret can learn from lingerie upstarts

This toy SpaceX rocket is (almost) as hard to land as the real Falcon...