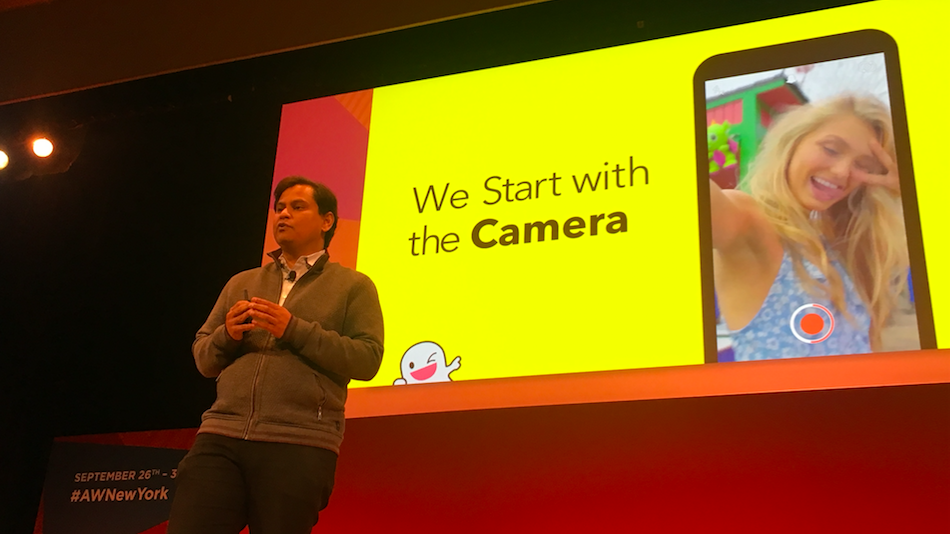 The company, now known as Snap Inc., is looking to convince advertisers and marketers of its value, positioning itself as stronger than other digital networks and touting its platform as a new form of television.

The presentation by Chief Strategy Officer Imran Khan at Advertising Week in New York City on Monday came on the company’s fifth birthday and two days after its rebrand from Snapchat to Snap Inc. On Friday, Snapchat announced it will release a new hardware product, Spectacles, a pair of sunglasses with a camera linked to its app.

” The biggest misconception that I hear about Snapchat is that Snapchat is just another social media company. In fact, Snap Inc. is a camera company. We believe that reinventing the camera will present our greatest opportunity to improve the way people live and communicate,” Khan said onstage at The Town Hall theater in Times Square.

Less than two years Snapchat introduced advertising in its app, and it’s still early days for marketers trying to understand the platform let alone its advertising options. Khan did not have a pair of Spectacles on hand nor share future hardware. Instead, he explained to the audience the current content on Snapchat and where advertisers fit in.

Khan spent the first 20 minutes explaining the app’s three content hubs — My Story (for friends), Live Stories (for events) and Discover (for professional content) — and its ad products.

Beyond its app engagement

“I thought it was an interesting demo of the new ad features for brands and agencies to understand how to use Snapchat,” Jeffrey Sheets, an attendee and an advertising professor at Brigham Young University, told Mashable. “But it also felt a bit like a tutorial of how to use Snapchat for all the old people in the audience — and thank goodness for my students to help keep me young.”

Indeed, the majority of Snapchat’s userbase is under 34. Yet, Khan did not use the word “millennials” in his pitch.

Beyond its app engagement, Khan credited its fast product cycle with the company’s attractiveness to users and to advertisers, citing several major changes in the last two years.

“We added geofilters so that you can share when and where a moment of a snap [happens]. We added lenses which map your face and turns it into puppy,” Khan said, inspiring laughs from the theater. “We added Chat. We added Discover. We added avatar to run into Bitmoji, and we added Memories.”

General Mills Chief Marketing Officer Ann Simonds, speaking as part of the presentation, also heralded Snapchat’s innovation and its ability to take risks that turn into smart bets. For example, Snapchat’s vertical video ads initially confused marketers and were then praised as well as mobile ads with sound on.

“Like any partnership, it has to start at a place of mutual understanding. Where’s the shared value?” Simonds said.

Spectacles, which have yet to receive a release date, provide 115-degree video that could also be attractive to brands, not unlike Facebook and YouTube’s 360-degree video ads.

The change to Snap Inc. provides another signal to marketers. “Most of its users won’t care or notice because they’ll be busy Snapchatting, but for marketers and others it’s a sign of things to come,” Peter Petralia, managing director of digital strategy for brand engagement company Sullivan, told Mashable.

Additionally, Snap Inc. has a future in television-like content. The presentation included a video of NBC’s new exclusive content from The Voice, and Khan teased that The Tonight Show with Jimmy Fallon will soon air on Snapchat. “Just like television,” he said after a clip aired.

“If you takeaway anything, I fundamentally believe we are just at the beginning of our innovation cycle, and I’m really excited to bring many new great products to our advertising partners in the next five years,” Khan said.

If this is an earthquake-proof bed, I’d rather take my chances

Apple’s new 3D Touch: Everything you need to know

Here’s what it’s like to use Facebook’s virtual assistant, ‘M’