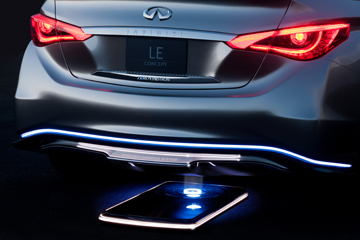 Aftermarket EV charging company Evatran is almost ready to start shipping its Plugless wireless charging aftermarket solution to Tesla Model S owners who pre-ordered the product, and a new video shows the production system in action. As you can see, what the company offers is a way to create a drive-up wireless charging pad, which provides induction power via an add-on module installed on the Tesla itself.

And before you even ask, Plugless has a network of installers who do this part for Model S owners, included in the cost of purchase (currently $2,440 per system). The add-on won’t affect your warranty, either – even though Tesla and Plugless don’t have any official relationship, and Plugless is strictly an aftermarket add-on, so long as the Plugless system doesn’t negatively affect the vehicle there’s no effect on your warranty. Plus, the company tells TechCrunch it offers its own three-year warranty that will cover the cost of any impact its system has on your car, though it hasn’t run into any issues with its add-ons for other vehicles.

Plugless charges at a rate of about 7.2kW, which provides a minimum of 20 miles of driving time per hour, and it’s rated for use either indoors or outdoors. The current version works with rear-wheel drive Tesla model S models only, with plans to introduce support for all-wheel drive versions beginning later this year.

Evatran says that the first installations are going to start rolling out in a few weeks to a small group of initial reservation holders, with more broad roll-out ramping up in the fall.

It’s a very different approach from Tesla’s robotic snake charger, but one that’s probably more practical in the near-term.

Would Apple have made the move now if it didn’t own Beats?