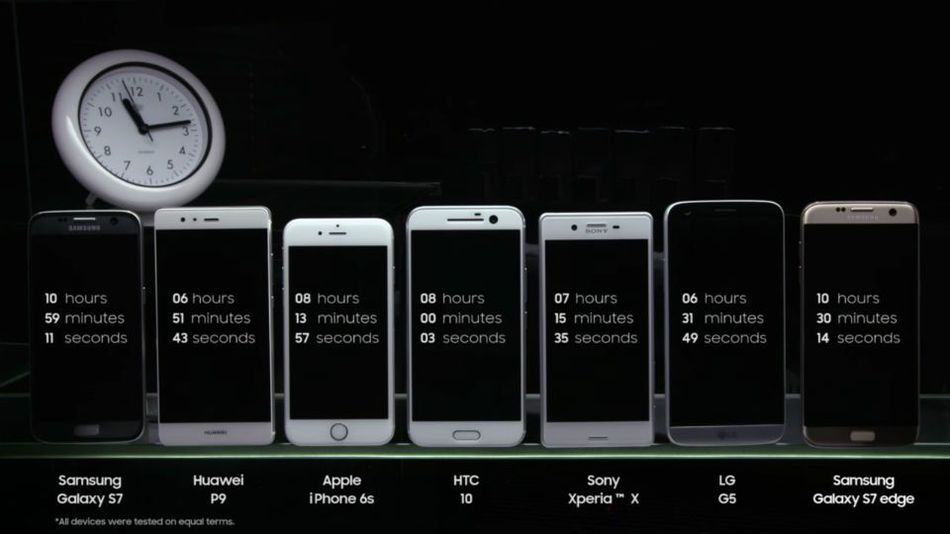 Samsung’s Galaxy S7 and Galaxy S7 Edge both have great battery life, but are they the best out there? Well, if you trust Samsung Deutschland’s battery test video, in which the company compared five other phones with its two flagships, there’s no competition.

In the test, we see five popular phones go against the S6 and S6 Edge. Sometime around the 6:30 hour mark, the phones’ batteries start dying. The first to go is the LG G5, followed by the Huawei P9, Sony Xperia X, HTC 10 and iPhone 6S, which lasts 8 hours and 13 minutes. The last two phones standing are Samsung devices. The S7 Edge lasts for 10 hours and 30 minutes, while the S7’s battery dies at 10 hours and 59 minutes.

While the test shows Samsung devices as clear winners, take it with a pinch of salt. It would theoretically be possible to rig such a test in numerous ways; and even though Samsung claims the devices were tests on “equal terms,” we don’t know the phones’ exact settings or how many battery charge cycles each individual device has had.

There is one glaring omission, though — the iPhone 6S Plus is not present in the test. Going by screen size, it would be a better match for the 5.5-inch S7 Edge than the 4.7-inch iPhone 6S, and it would likely fare better as it has a much bigger battery. Sorry, Samsung — it’s a cool video, but it didn’t quite convince us the S7 and S7 Edge are the best when it comes to battery life.

In the age of the algorithm, top Instagram brand Valentino needs to rethink its...

The GameOn Project wants to be a Pandora for mobile games by building a...

How can Facebook bring its live video feature to the masses? Messenger