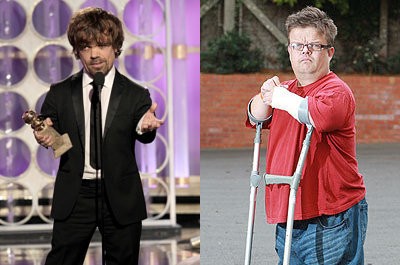 A DWARF who was made famous by Game of Thrones star Peter Dinklage after a drunken thug hurled him to the ground in an alleged copycat “dwarf tossing” prank has died, five years after the brutal attack.

Harry Potter actor Martin Henderson, 42, reached the attention of audiences worldwide when Dinklage – who plays Tyrion Lannister in the hit series – mentioned him during an acceptance speech at the Golden Globes in 2012.

MARTIN WAS OUT CELEBRATING HIS 37th BIRTHDAY AT A PUB

Martin was out celebrating his 37th birthday at a pub in 2011 when he was picked up and thrown by a drunken reveller while smoking a cigarette outside the venue. The sick prank has been blamed on the notorious antics of the England rugby team.

The attack left the 4ft 2in actor with horrific injuries to his back, legs and arms.

He also suffered from spinal stenosis and struggled to walk properly since the incident and eventually he need the support of a walking frame to walk around.

Martin’s name was trending worldwide on Twitter in 2012 thanks to fellow dwarf actor Peter Dinklage.

The US star was picking up the Best Supporting Actor award at the glittering ceremony in California when he said: “I want to mention a gentleman I’m thinking about in England.

“His name is Martin Henderson. Google him.”

This came after the actor was told Henderson could end up in a wheelchair because of injuries sustained when he was picked up and dropped on the floor by a drunken yob.

The actor from Milborne Port, Somerset, who also played a goblin in two Harry Potter films, blamed the England rugby union team for the incident during the team’s World Cup campaign.

It came one month after rugby star Mike Tindall and several of his teammates admitted attending a ‘dwarf tossing’ event in a New Zealand bar.

England’s rugby team were also seen downing shots as they partied in a Queenstown bar called Altitude, which was hosting a ‘Mad Midget Weekend’

Martin was more recently was thrust into the spotlight after two men allegedly broke into his home in the middle of the night and kidnapped him.

He was allegedly made to drive to a bank on Wednesday, February 17, in Sherborne in his specially-adapted Ford Galaxy car.

At the time a neighbour said: “He’s scared to live here now and has gone away for a few days. We moved here to get away from it all as Milborne Port is a quiet place; I’ve never seen anything like this happen before here.

“It’s very scary; there were armed police all over the courtyard the next day. I originally thought it was people just going upstairs.”

He reportedly never came back to the house after the incident and new people are now living there.

One man has been charged, jointly with another, for robbing Martin’s mobile phone and a bottle of aftershave on February 17.

The man was also alleged, jointly with another, to have unlawfully and by force or fraud took or carried away Mr Henderson against his will on the same date.

He is due to stand trial in the New Year.

Reacting to the name-check from his Game of Thrones colleague, Martin said at the time: “I could not believe it when I heard I had been mentioned.

“I was totally shocked. It is really odd to think my name was heard by all these actors.

“It is nice to know my message is getting out to people that it is not acceptable to throw dwarves around.”

Here’s to the ‘barketing manager’: Meet the furry powerhouses behind the UK’s ad agencies

The ultimate guide to leveling up your coding skills