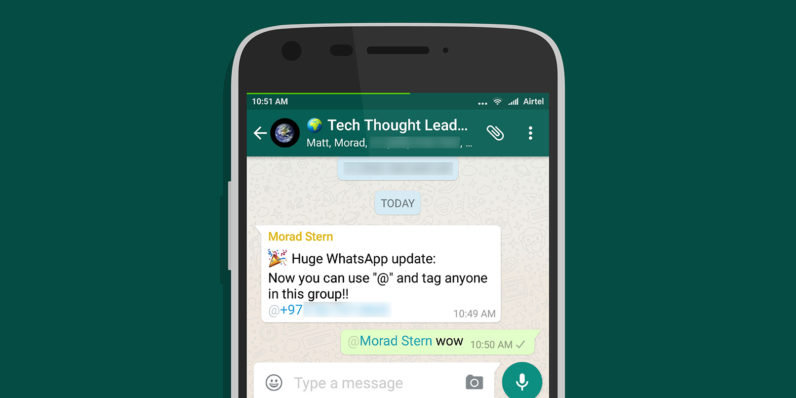 WhatsApp has quietly added the ability for users in group chats to tag other participants, so they receive a notification even if they’ve muted the conversation. The feature works on Android and iOS, but not on the desktop app.

According to The Next Web, You’re probably not going to like this if, like me, you’re in a number of groups that you didn’t ask to be invited to. But if you’re lucky enough to be a part of productive and positive group chats, this will certainly come in handy to keep conversations on track.

To tag someone, simply enter the ‘@’ symbol, followed by their name; you can choose a contact from the menu that pops up. You can tag multiple contacts in a single message. It also works with contacts that you haven’t saved to your address book, but are part of the same group chat as you.

WhatsApp previously added a feature that allowed you to quote messages in group chats to make it clear what you’re responding to. It also expanded group sizes from 100 to 256 participants.

With this new tagging feature, the Facebook-owned messaging service is making it even easier to keep the conversation alive with multiple contacts. What it can’t do, unfortunately, is make people less annoying in group chats.

You can now pair multiple Apple Watches to an iPhone, but why?

You can try Apple Music on Sonos starting December 15