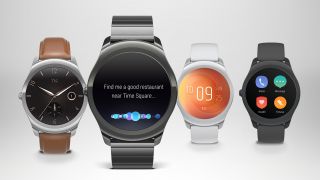 This is the cheapest Android smartwatch yet. The $99 Ticwatch 2 offers a ton for the money

The wearables market is in decline, but that isn’t stopping Chinese startup Mobvoi from creating its own smartwatch. The Ticwatch 2 is actually Mobvoi’s second smartwatch designed for the global market, running the company’s proprietary Ticwear 4.0 software, which is based on Android and not Android Wear. But the most compelling feature of the Ticwatch 2 is its price; the watch will cost just $99 for Super Early Bird Kickstarter backers.

So what do you get for $99? A lot, actually. Physically, the Ticwatch 2 looks like any other generic smartwatch with a round face, but there are a few hardware features that make it unique. The most interesting feature is the hilariously named “Tickle” touchpad on the side of the watch. It allows users to navigate menus by swiping up and down without obscuring the screen. Think of it as a clever take on the Apple Watch crown.

The Ticwatch 2 also features 20mm quick-change bands, an always-on OLED display, heart rate sensor, step tracking, GPS tracking, and a metal build. There’s also a speaker and mic for taking calls and voice dictation. Battery life will be average, with a claimed day of use between charges. Thankfully, the Ticwatch 2 comes with a magnetic pad for simple charging.

Since the Ticwatch 2 doesn’t run Android Wear, expect some capability issues with Android Wear apps. Mobvoi claims its Ticwear software will run some Android Wear apps and watchfaces. While Ticwear 4.0’s underpinnings are Android, it looks and acts like Android Wear. You get a voice assistant, gesture navigation, notifications and fitness tracking, which are all features you get in Android Wear. But by running Android instead of Android Wear, Mobvoi can control the look, feel and functionality of its smartwatch experience without the restrictive Android Wear design principles.

The Ticwatch 2 is available on Kickstarter today. Most of the $99 Super Early Bird specials are already gone at the time of this writing to act fast if you want a deal on the watch. Retail prices for the watches will range from $199 to $299, depending on the color and band options.

Stay tuned for our full review of the Ticwatch 2.

How Ozy leans on The New York Times and Wired to build its newsletter...

Silicon Valley comes out in full force behind SF Pride

Google may have just killed the delivery guy

Twitter is testing an ad campaign manager for Android and iOS