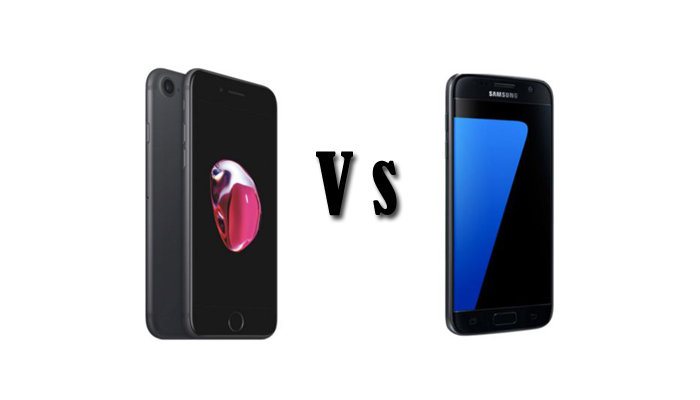 The wait is over. Apple has officially unveiled the iPhone 7, and the death of the headphone jack has been confirmed, along with a few other features that consistently popped up in various leaks and rumors. Plus, there are new colors and the promise of the best camera on a smartphone ever. But how does the iPhone 7 compare to the likes of the Samsung Galaxy S7? Valuewalk compared both phone for you. Let’s take a look.

As both handsets offer premium designs, the iPhone 7 with its aluminum unibody chassis and the S7 with its glass and smooth metal finish, it is not surprising to discover that both are extremely thin devices. However, it is the iPhone that will fit better in your pants pocket due to its thinner frame.

Both devices come in five distinct colors. For the iPhone 7, the options are are Black, Jet Black, Silver, Gold, and Rose Gold. For the Galaxy S7, you can choose from Gold, Black, Silver, White, and Pink.

Before the launch yesterday, there had been many a rumor suggesting that the iPhone 7 with its 4.7-inch display could have a display resolution of 400+ pixels per inch. However, since the unveiling, it has become clear that these rumors were not even close because the handset’s display specifications are 750×1334 resolution at 326ppi.

On paper, the Galaxy S7’s screen wipes the floor with that found on the new Apple handset. At 5.2 inches and featuring a QHD AMOLED panel, the S7’s resolution is 251ppi higher at 577 pixels per inch, which means that its resolution and sharpness are far superior to those of the iPhone 7.

The problem with this comparison is that at first glance, the iPhone 7’s display does look the 25% brighter promised by Apple. But the reality is that it’s just not able to compete with what Samsung has produced yet again.

At yesterday’s event, Tim Cook made big, bold statements about the redesigned Home button on the iPhone 7. But to tell the truth, this is nothing new, as both handsets have multi-functional home buttons with fingerprint sensors.

As far as ports go, the Galaxy S7 has the tried and tested microUSB port. However, Samsung has since moved on with the Note 7 and incorporated a USB-C connection. You may be aware that the iPhone 7 uses Apple’s proprietary Lightning port, which has now replaced the headphone jack as well. This means that it now has an additional role as well as charging, using Bluetooth and Apple’s new wireless tech.

The iPhone 7 and Galaxy S7 have different levels of water and dust resistance. Apple’s device has a rating of IP67, which means it protects against dust. For water resistance, this IP level means it can protect against immersion in water up to a depth of 15cm and 1 meter.

The Galaxy S7, on the other hand, is IP68 rated, which means you can submerge it for longer periods in water under pressure. Plus, it is also dust resistant.

On paper, the iPhone and Samsung’s handset are evenly matched. The Apple device has a 12-megapixel rear-facing camera which features an impressive six-element lens and a much wider f/1.8 aperture than its predecessors. Additionally, there is optical image stabilization, a 7-megapixel front camera, and a Quad LED flash that is 50% brighter than the flash on the 6s.

The Galaxy S7 also features a 12-megapixel rear camera which comes with a f/1.7 aperture, LED flash, phase detection, optical image stabilization, auto-focus, and Samsung’s own proprietary Dual Pixel technology. Plus, there is a 5-megapixel front camera which is good for catching the odd selfie.

Let’s forget for the moment that Samsung has provided a microSD card slot for the S7 and look at internal storage variants. So Apple comes out on top in terms of internal storage as it offers a wider range of options: 32GB, 128GB, and 256GB.

The S7 has 32GB and 64GB options, but it does have that card slot, which is compatible with cards up to 200GB.

There is a good chance that you had a winner in your mind before you read this article. But if you didn’t and just want to know which handset is better, I have to say that they look evenly matched when it comes to specs.

Yes, the Galaxy S7 has a higher resolution and much bigger display, a bigger battery and a microSD card slot. But the iPhone 7 has what could be the fastest CPU seen on a smartphone to date, plus a camera that could end up producing almost DSLRquality images.

In defence of sex machines: why trying to ban sex robots is wrong