This article is from Pulse, Digiday’s quarterly print magazine about the modernization of media. This is a peek at the second issue, which focuses on the current state of programmatic advertising — and how to fix ad tech. To receive the full 80-page issue and subscribe to a year of Pulse, visit pulse.digiday.com. 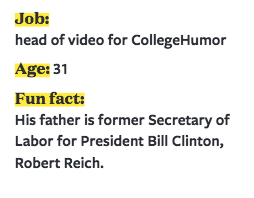 College Humor’s head of video, Sam Reich, dropped out of high school, and was fired as a waiter at the age of 16. Now, he spends his days creating original video for College Humor, and crafting content for different platforms, which he says is key to making successful video.

He shares with us his first big break.

Have you ever been fired?
I had a job as a waiter for about a couple of weeks when I was 16. I had lied and told them that I was 26 in order to get hired. They did a wine tasting one night and I had never drank anything before in my life, but in order to keep up this ruse I did. I was so hungover the next day that I slept right through the brunch shift. When I showed up, they were just like ‘Dude, you’re a basketcase.’ I got promptly fired.

Biggest professional screw up?
I visited a friend that was working on a TV show and he gave me a tour of it and after that was done, I wrote up a blog post about my experience behind-the-scenes of the show. As it turned out, that post was way too revealing and my friend got in trouble at the show. Turned out to be fine, but he was understandably furious at me. In that moment I learned that learned the dark side of social media and now I’m a lot more careful about what I put out there.

What was the moment you realized you broke out?
My comedy group had been putting videos online long before there was even a Flash player, so we were post-ing Quicktime files to the internet and people were downloading them. We had no idea how big our audience was or wasn’t because we never had any analytics. We put on a live show at UCB [Upright Citizens Brigade], having no idea what to expect, and sold out within minutes and there was this huge ravenous crowd. We felt like total celebrities. We had no idea that anybody was watching so that was a really cool experience.

What’s the best advice you’ve ever got?
It was from my high school drama teacher. He told me, “It’s not how much you want something, it’s how long you want it for.” This business is borderline impossible to any teenager who wants to get into entertainment. If you want this career, you have to be willing to put in a decade or more to be able to make it work, and if you’re not willing to do that, then you’re probably not in the right industry.

What’s the biggest change you’ve seen in online video in the past decade?
The big change is the “BuzzFeed-ification” of content. The internet used to be this place where very weird and niche work was celebrated, and that’s still true to an extent. But people stopped sharing links with each other via email or gathering around computers to watch weird video. When it started to be primarily social sharing, then it had to be video you were comfortable posting to your Facebook wall. It has become this issue of identity, so “I share this video in order to say something as a person or in order to associate myself with this piece of knowledge.” The term is no longer viral, which is almost vintage at this point. Now the term is shareable and what makes a video shareable.

How would you sum up your career?
My living life out of order. I dropped out of high school and then started working at a young age and then had a corporate job from the age of 22 then eloped with my wife at 26 and might still have a wedding and got my first-ever driver’s license last December. It all feels weirdly out of order to me.

How does your father, the famous economist Robert Reich, feel about your career?
My dad loves, and lives somewhat vicariously, through my job. He’s always been a ham because he did theater in college, and even briefly hosted a PBS show. He’d never admit this, but he even contributed jokes to our “Donald Trump: Show Us Your Penis” video.

Really?
Let’s face it: there’s a lot of show business in politics and politics in show business, so we help each other out with insights. He’s coached me through some tough business decisions, and I coached him through his early days on social media.

If you enjoyed this sneak peek at the programmatic issue of Pulse Magazine, get your yearly subscription here.