Digital Review
Home Android Who did win speed comparison between the iPhone 6S and Samsung Note... 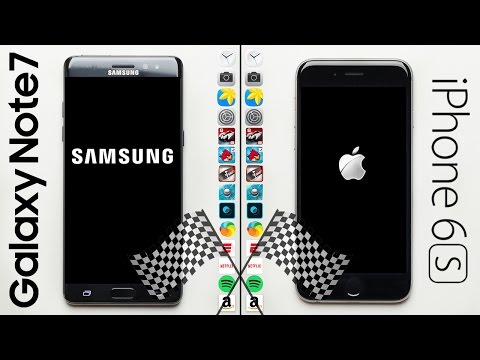 The folks over at PhoneBuff published a speed comparison between the iPhone 6S and Samsung Note 7. Spoiler: the iPhone wins, by a lot.

In all, it took the Galaxy Note 7 two minutes and four seconds to launch 14 apps and render a video; it took the iPhone one minute and 21 seconds to do the same.

Apple has optimized its hardware

The iPhone 6S is running on a year old processor and just 2 GB of RAM, while the Note 7, which was just released this week – is using a 6 month old chip with 4 gigs of RAM a ton of Samsung customization.

TheNextWeb already mentioned the Note 7 isn’t the fastest of the current Android flagships in my review, but the result isn’t surprising for anyone who’s been following the iOS vs Android saga since the outset anyway. Apple has optimized its hardware and software to work in sync, while Android’s vast array of fragmented hardware means you generally need more powerful devices for the same performance.

Nobody opens a sequence of apps

This test isn’t fully indicative of real-world performance or productivity, of course. Nobody opens a sequence of apps in that way, and most of the slowdown happens in loading games.

More importantly though, this kind of speed test doesn’t cover features like the Note 7’s split screen or S Pen-powered Glance feature, both of which let you work with two apps simultaneously. When it comes to doing real work done, I’d argue the note 7’s focus on multi-tasking pulls ahead.

Still, it’s another bit of proof that when it comes to pure, real world speed, hardware can only go so far. We’ll be curious to see how Google’s upcoming Nexus – which should be better optimized – holds up to this year’s iPhone.

Impact Engine closes its accelerator and a $10 million impact fund