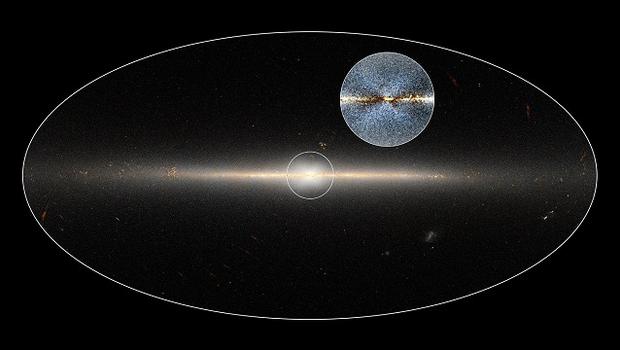 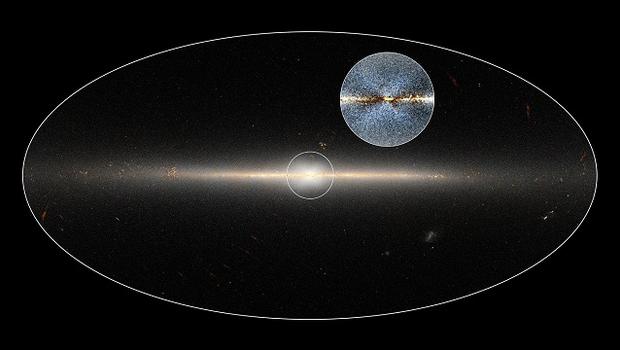 In May 2015, astronomer Dustin Lang posted some new maps of the Milky Way galaxy to Twitter. The post sparked the interest of Melissa Ness, a postdoctoral researcher at the Max Planck Institute for Astronomy in Heidelberg, Germany, who noted that the images provided a clear view of an X-shaped distribution of stars in the galaxy’s central bulge. The two joined forces and used the maps to get the clearest view to date of the X shape.

“Serendipitous science like this doesn’t happen when data are squirreled away or kept private among a small group of researchers,” Lang told Space.com in an email, adding that the discovery is a great example of the benefits of open science. [Stunning Photos of Our Milky Way Galaxy (Gallery)]

The Milky Way, which houses Earth’s solar system, is a barred spiral galaxy, meaning the stars and gas clouds in the inner region form a bar shape, while the rest of the disk is made of four spiral arms that wrap around the “bar” in the middle. At the very center of the bar is a ginormous “boxy-peanut” bulge that appears to be 3D, compared with the Milky Way’s flat disk, NASA officials said in a statement.

“The X-shaped structure lives inside the ‘boxy-peanut’ bulge,” Lang, an astronomer at the University of Toronto’s Dunlap Institute, told Space.com in an email. “Imagine that the bulge is peanut-shaped, where the peanut is lying flat, and we’re looking at the long side of it, but it’s rotated about 30 degrees, so one side is closer to us than the other. The stars in the X are orbiting within the peanut.”

Lang’s maps of the galaxy were created using data from NASA’s Wide-field Infrared Survey Explorer (WISE). While previous studies suggested the Milky Way’s central bulge was X-shaped, Ness and Lang’s work uses two infrared surveys of the entire sky to show the clearest view of the X-shape captured to date, according to a statement from NASA. “The bulge contains … most of the oldest stars in the Milky Way,” Lang said. “So if we want to understand the formation of the Milky Way — and galaxies like it — the bulge holds important clues.”

A galactic bulge can form “over time in an isolated galaxy, or it can form as the result of two galaxies colliding; those bulges will have different structures,” he said. The X-shaped structure of stars in the Milky Way’s bulge is “quite delicate,” Lang said, and was formed through the gravitational push and pull that has affected that region over a long period of time.

A collision between the Milky Way and another galaxy would scatter the stars in the X onto more random orbits, Lang explained.

“So the existence of the X tells scientists that the Milky Way hasn’t experienced such a collision, but has been quietly going about its business in isolation for several billion years,” Lang wrote.

“The bulge is a key signature of formation of the Milky Way Galaxy,” Ness said in a statement from NASA. “If we understand the bulge we will understand the key processes that have formed and shaped our galaxy.”

Lang originally reprocessed the WISE images for the Sloan Digital Sky Survey, which maps the 3D positions of millions of galaxies to study the expansion of the universe over time. He publically released the images on Twitter and an interactive website called Legacy Survey, in hopes that they could be used for other purposes, he told Space.com.

“This was a really fun and surprising project for me. I normally work in ‘extragalactic astronomy,’ studying the way galaxies far outside the Milky Way cluster together, and how they change over the history of the universe,” Lang said. “In our surveys, we often avoid looking in the direction of the Milky Way altogether, because it has so many stars and so much dust that we can’t see through it to the background galaxies we’re interested in.”

After posting the images of the Milky Way galaxy to Twitter, Lang met Ness at a conference in Michigan a few weeks later and decided to collaborate on the new study, published in the Astronomical Journal on June 21.

“It’s funny, those mosaics — terabytes of images — were sitting on the web for a couple of years, and it was only once I made some ‘pretty pictures’ out of them that they caught this attention,” Lang said. “One of the things I really like about this project is that I see it as a success story for open science ? it’s a case where releasing data publicly and communicating our results to other scientists and the world (in this case via Twitter) generated a scientific result that I hadn’t even remotely foreseen.”

‘George W. Bush’ is Wikipedia’s most-edited page of all time

The best gadgets from 2015 to buy with your Christmas money